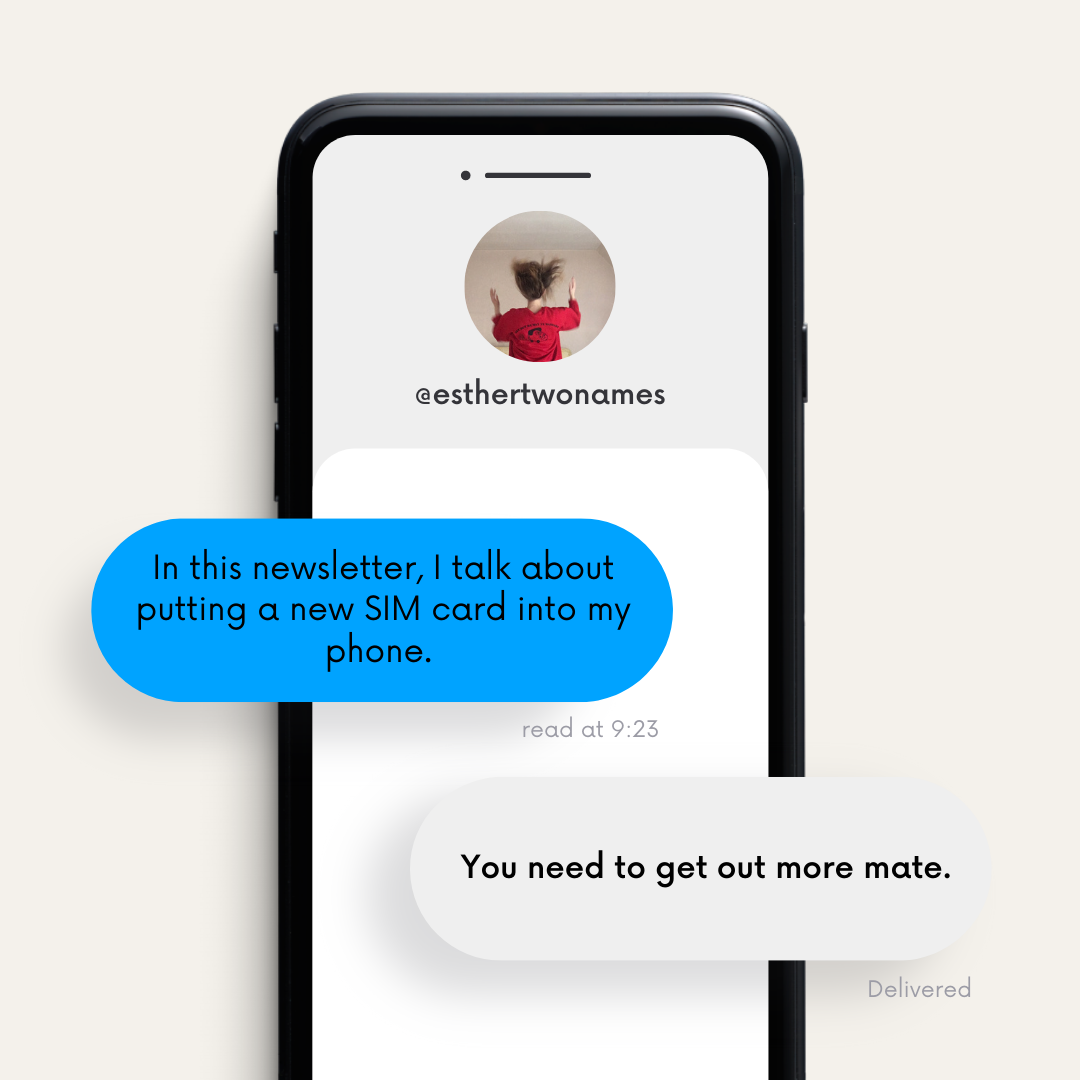 This particular newsletter was written in November 2018. In it I covered the hot topics of me putting the SIM card in the wrong way in my phone and the live recording of my podcast. It is not a classic offering but here it is anyway.

I’ve been writing list after list lately and never quite getting to the bottom of them. I felt like my head and body were fritzing and fizzing at the weekend. I couldn’t wind down. One of the things on my list was to change phone provider to save me some debloons so I can invest in sandpaper factories and other great things. So off I trotted into into town to collect my new SIM. I then treated myself to a stinking rasher sandwich in Metro and returned home to start my new life with my new phone network. However, because I was running at eight million miles a minute I didn’t place the new card, like you’re meant to, on the tiny SIM tray that pops out. Instead, I shoved it straight into the cavity of the phone. A cellular abyss. ‘Terrific’ I thought. I was trying to be so efficient getting a better phone deal and in three seconds I had broken the bloody handset. But EO’MD decided to try and resolve the situation. I burped the back of the phone hoping it would shoot out. I tapped its little butt trying to dislodge it. I got my tweezers and attempted to surgeon it out to freedom but alas no. Fuckedy arse. Then, feeling like Russel Crowe in a Beautiful Mind where all the quadratic equations fly past his head showing us that his mind is very beautiful and he can do long division really quickly, I got two needles from my sewing kit and shimmied the tiny card up along one side. Then, when a little triangle of card was peeking out, I got the aforementioned tweezers and yanked it forth! It focking worked! I felt as happy as when I realised that Marks and Spencer hadn’t in fact discontinued their Spicy Sichuan Pork dish but had just repackaged it and moved it from the Japanese section to the Chinese section. What a joy!

Except it will be LIVE! Thursday night in Mutiny Theatre at Pembroke Place for the first ever The 80% LIVE! I have never done a live recording of the podcast before and while I know my very special guest Louise Mc Sharry will pull focus away from any major mishaps I may make, I feel a lil’ apprehensive. However, as me ol’ palso Ian Dempsey (watch your feet!-I just dropped a name!) said ‘get the start and the end sorted and let the bit in between happen’. It’ll be fun! Sure, what is the worst that can….EEK!